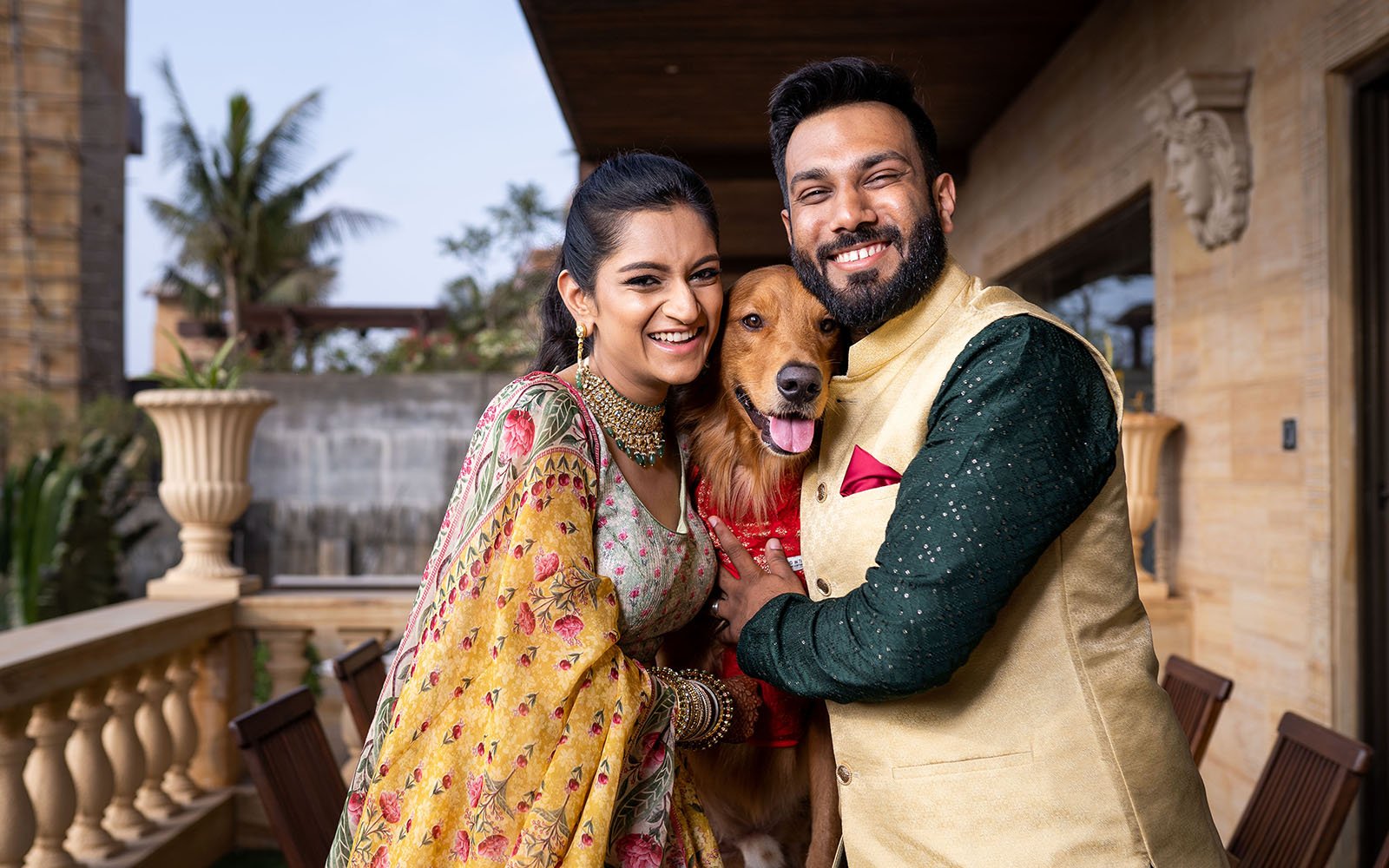 After a whirlwind romance across beautiful locations around the globe, Miloni and Nihar got married at Della Resorts, Lonavala. The best part – their pet son, Rancho was a part of the charming festivities spread across two days. It was a crazy affair, filled with happiness, joy and unlimited dances. Here is the story leading to #NVMilove.

Nihar, our groom, is a chemical engineer by profession. He grew up in Mumbai and moved to the states for university. Miloni, our bride is a psychologist by profession, and bakes cakes in her free time. Miloni grew up in Belgium and moved to London for university. Nihar and Miloni were introduced by Miloni’s best friend. Nihar was living in Dallas at the time and Miloni in Antwerp then. They connected over WhatsApp and FaceTime, and very early on they both were sure about each other. The first time Miloni and Nihar met in person was in Toronto, at Pearson International Airport. Miloni was attending a conference in Toronto, and Nihar decided to travel to see her. They had a magical time, including spending a day at Niagara Falls. They next met in Dallas, where Miloni met Nihar’s golden retriever, Rancho, for the first time. They were sure about being together, and they let their parents know of this. A few months later, both the families united in Antwerp. They were delighted to share Miloni and Nihar’s engagement to their family and friends. After all their travels and ventures abroad, Miloni and Nihar decided to settle in Mumbai.

Nihar’s side of the family put up at the Dukes Retreat, Lonavala, and Miloni’s side was put up at Della Resorts, Lonavala. The festivities started with Nihar and his parents welcoming guests, proceeded by dhol and crazy dance. Let us tell you that dance   was the major highlight of this wedding, and loads of dance and craziness shall follow in this blog. Lets first start with the Welcome Dance.

Met our groom – Nihar: The one thing that will immediately strike you when you meet Nihar is that he is totally a people’s person, he is also the “center of attraction at every party” and also dance runs through his genes.

Nihar & his friends were a close-knit group. They were always there for Nihar, and up to crazy antics. We got to witness the crazy and warm side of Nihar’s friends throughout the wedding.

Post the welcome dances, it was time for Nihar’s Haldi. And our groom was not spared at all. We saw an epic Haldi where – Nihar’s clothes were torn, and thereafter his face was smeared with schezwan sauce, chutney, butter, raita and what not. Post the haldi  aftermath, the friends were kind enough to escort our groom for a shower too.

Post the Haldi, we headed to Della Resorts, where our gorgeous bride Miloni was getting ready for the Mehendi ceremony.

Meet our bride – Miloni: The one thing which is spectacular about Miloni is her smile, beautiful and genuine in every way. Her attention to detail is just remarkable and she goes out of her way to make her closed ones feel special.

The Mehendi ceremony celebrated the Texan culture of Dallas, where Nihar & Miloni met for the second time. Miloni wore a stunning lemon and pale blue Anita Dongre lehenga with multicolored motifs that matched the color palette of the decor. Nihar wore a green kurta  with yellow waist-coat. Miloni & Nihar were delighted that Della Resort is dog-friendly that enabled their pet dog, Rancho to be a part of all their ceremonies. Rancho is a crucial part of their lives and complete their family now. It was quite obvious that we wanted to include Rancho for their couple shoot 🙂

And when Rancho joined them for their Mehendi ceremony entry, it was beautiful and overwhelming and beautiful in every way

Our bride and groom are really a riot, when they are together. The energy they bring out together is tremendous. They totally love each other’s company and enjoy making memories together

Friends and Family are truly the sunshine of Life. Nihar & Miloni’s wedding saw such great bonds of friendship – revisiting old ones while creating new ones. Also, time to introduce Niomi, Nihar’s sister who shares a great bond with Miloni.

The last  photograph in this series is a proof.

Mehendi ceremony thereafter, saw performances and garba. It was beautiful as energetic performances went through the entire afternoon, till the wee hours of the evening. We were tired from back to back shoots the same week, but somehow the energy at the garba really got to us, and we had so much fun documenting the dance performances. Guess that’s the magic and beauty of garba and gujarati weddings!

The diamond capital of the planet, Antwerp, which has been Miloni’s home was the perfect inspiration for the glitzy sangeet night with shimmering crystals, twinkling lights, and a glamorous blue glow that ruled the evening of dance and music, and of course Belgian waffles.
This is how the evening started as we started documenting stories from Miloni’s room. Miloni has two beautiful sisters – Pasmi & Saloni, who were by her side throughout along with her mom.

Miloni’s embellished blue lehenga by Seema Gujral was chosen to sync in with the theme colour of the sangeet night – blue. And she  looked stunning in every way.

This is how Nihar and Miloni entered and all the eyes, undoubtedly were on them.

Dance was the major highlight of this wedding, we repeat ourselves again. The evening saw some amazing next-level performances. Here is how the first half of the evening looked like.
Starting with our groom, Nihar who rocked the stage.

Followed by our bride, Miloni who really danced away all her happiness with killer thumkas.

We also got to witness some family moments and family performances.

And then followed by performances of the friends.

Our bride and groom were surely having a great time.

The next performance was featuring the couple themselves. And, they surely won many hearts with their special performance.

Finally, after all the energetic performances came to an end with the favourite song of the season ” Sauda Khara Khara

The audience kept cheering for more.

Soon, the stage was taken over by Singer Dilesh Doshi, and he ensured that the rocking evening continues.

We also witnessed Nihar singing and everyone cheered through. Surely, it was amazing.

And the night ended with all happy memories. Along with them, we too danced a bit.

A British-themed lunch was hosted the following day to celebrate Nihar and Miloni’s time in London.

The day began with our bride basking in the glorious morning sun.

Nihar’s Getting Ready Story : The mood at Nihar’s room was very chilled out, filled with hustle and bustle, and ofcourse had Rancho who kept everyone around happy and entertained

Thereafter, our groom started getting ready in the company of his friends and Rancho.

Special mention here to Atish, who is Nihar’s best friend and best man, and was there for him throughout. Even when our groom needed band-aid

Nihar was very particular that he would not take portraits alone. And he didn’t let us take his solo portraits on the first day. But we convinced and managed his portraits on the wedding day. We are sure he doesn’t regret now for the same

Miloni’s Getting Ready Story : Miloni had her best friend Bhavi inside her room, while she got ready. Bhavi is also the one who played cupid and made the match of Nihar & Miloni

Also, we made couple portrait of Nihar and Miloni, in the nick of time just before Nihar headed for his baraat. We swear the second photograph was impromptu, thanks to our bride Miloni

We made portraits with Miloni and Rancho. For the wedding, Miloni wore a pastel Kalki Lehenga. It’s interesting to mention that Rancho also matched his outfit with his mommy. Rancho’s customized sherwani was designed by Miloni. Don’t they look cutest?

Miloni’s girl gang kept her entertained throughout, and we had to make some photos with them.

Nihar’s baraat was one of the most epic baraats we have ever witnessed. The baraat went on for almost three hours. The friends and family danced their way to begin Nihar’s new journey.

It was so overwhelming to see the family bonding at the baraat. We also documented Miloni as she waited for her groom to come, who indeed made her wait for long. But she spent the time with her girls, smiling and laughing all throughout.

We proceeded now to the Jaimaal finally. And it was a surreal moment in the evening dusky sky as Nihar & Miloni exchanged garlands.

And the finale – Here’s to love, laughter & happily ever after. The theme city was Mumbai, where Miloni & Nihar would finally settle. We wonder what would be the intense conversation going on here between our bride and groom.

The Pheras and all the happiness. Followed by sindoor and mangalsutra. An emotional moment for Miloni and her mom. Her sister, Saloni also joins in. From Antwerp to Mumbai, Miloni’s life is going to change now.

Wait there is more. Its the same day Miloni got her PhD (Doctorate) degree. She joked later, that she got degree & dulha the same  day.

Like an amazing husband, Nihar broke out the news to everyone present there. Kudos to Miloni’s hard-work, and the celebrations just doubled, and her wedding day will be memorable forever. This is how the festivities ended 🙂

Thank you Miloni & Nihar, and the entire Sanghvi & Vakil families for all the love. It was absolutely great to be a part of your wedding.

Advice for Couples
Miloni shares, “The entire experience became smooth sailing once we identified our strengths and focused on those. Nihar managed the technical aspects, and I took lead on all things creative. This joint effort helped to pull our wedding together without chaos. Learn to pick your battles instead of locking horns over every decision.”

← Harsh & Alisha : Destination Wedding in Silvassa Say 'No' to Client Meetings →
Book Us